Our Restoration of the House ...and Jacques Coeur's motto was right..!

In the first days, living here, we carefully observed and tried to understand the house, listened to every noise and sound.
Not to listen eventual ghosts..! ;-))
but, to better restore it and enhance all its advantages, to try to prepare it for the next centuries.
Over years, we have improved greatly the comfort of living here... and probably brought her back a soul, in the same time, with her fresh white restored walls.
To restore a house like this , 500 years old, and where we want to live year-round, is very different from restoring a casual place or museum.
The previous owner was using the house only a few days a year.

The most amazing for us, today, is probably to realize we've done it quite totally by ourselves.
Our first works started in June 2002, just 6 months after we started living in this house 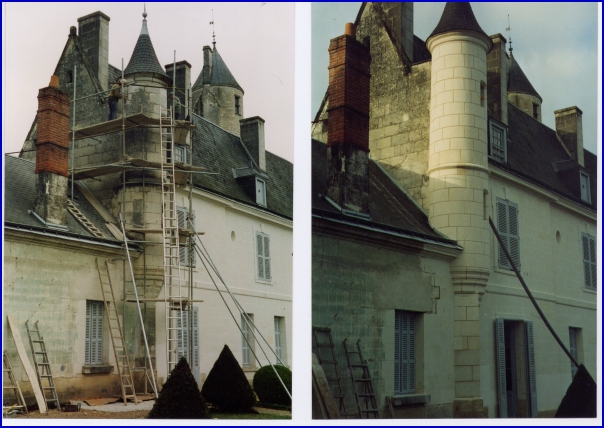 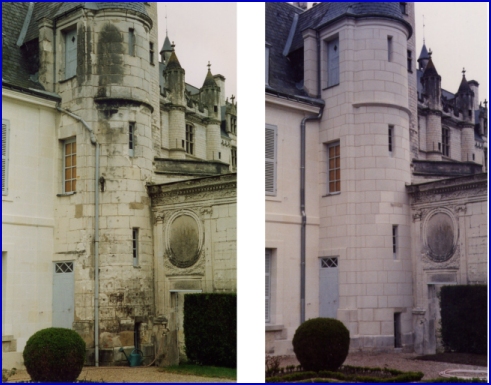 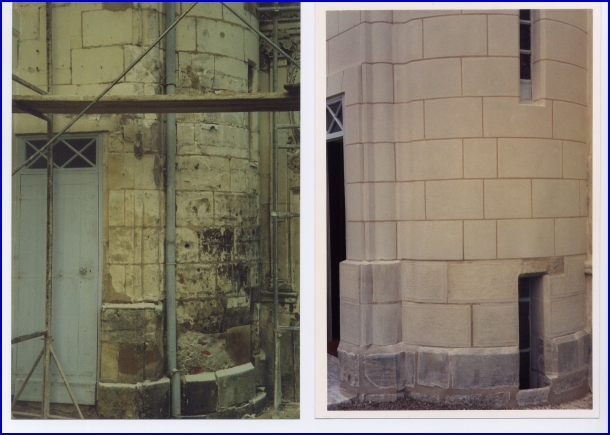 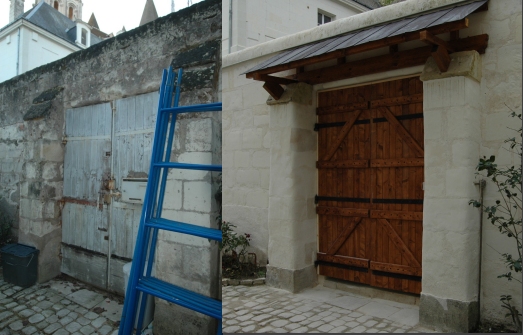 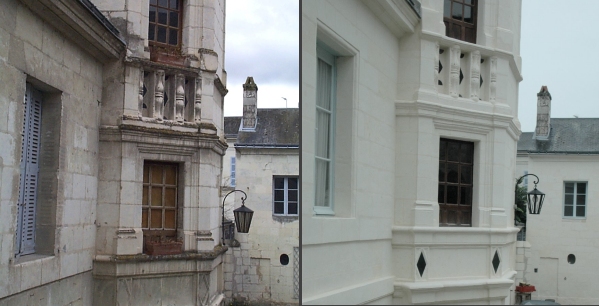 Upon arrival, the house was definitely not suitable for everyday modern life:
- Doorframes and windows from another age, no insulation anywhere.
- Inappropriate, noisy, poorly distributed ( in addition to a water pressure problem in this old part of the city, limited to 1.3 kg of pressure, instead of 3 kg usually elsewhere #update: our mayor updated water network in our Fort in 2011, and we have...7kg now, with a limiter to 3kg...had to be patient, the original water network was from 1910 ),
- not to mention ancient plumbing in all the house.
- The electrical rewiring was done in 1962, but with "old lead and ceramic system", obviously we had some safety issues !
- A Central heating, and archaic, from the "early" twentieth century with so-called "umbrella distribution" type.
- Add to that a tenacious parametric moisture issue (+ 80%) after each rain in parts of the ground floor
- and a poorly maintained garden
... not too serious a problem, at first look ?.

Humm..Poor picture, would you say…? ... How not to be demoralized by so many flaws?

In fact, we thought, and continue to expect surprises; we never quite know an old house when we first buy it, do we..?
And, first of all, this one had this... “je ne sais quoi" ,that inspired in us the passion, the desire to deal with it, give it a character worthy of its building era, while adding to it the best modernity has to offer, to make it comfortable, economical, ecological, and especially try to fit it out with essential long-lasting features, that would ensure it of facing the least technical problems possible in the future.

In addition “she” had assets that no other dozens of homes we visited had:
- an unparalleled setting, unique, beautiful, incomparable (as each of our guests pointed out every time, and that’s saying something!)
Then again, while integrating perfectly the majesty of the place and preserving its authenticity.

Once the inventory was done, and every point checked, everything came together: organize, and list the next most urgent tasks, changes, without never forget, possible developments and longer-term projects that will keep future improvements possible...when everything has to be redone from top to bottom, it is easier to start with a fresh new healthy basis, using modern (eco-friendly) materials and approach

So now a long period of work began, with tools everywhere, many small pieces of paper-ideas flying, such as things to keep in mind, to improve on, to do while also attending to other things... furniture that could be coordinated to the styles and periods of the few vestiges that remained in and around the house. A large paperboard was quickly set up in the main lounge that became the “battle’s” headquarters.... it became also, a place for storage: books, documents gleaned and antique furniture collected one by one, tapestries discovered, tables and other decoration objects from local flea markets.

Our challenge (and our main economic asset) has been to do everything ourselves (...well, 98% if we include the drilling of the medieval gate of the cottage on St. Ours, and the various professionals we eventually called for safety purposes to control and verify some highly technical points of our electrical network, or plumbing systems.) And everything else, the list goes on and on.... By doing the work ourselves (with some help from the Internet and books at times), we were able to save a lot of money... we learned a lot, tried things, sometimes even invented by assembling many tips of the various trades, and picked up some of their tricks.

If the cleaning and repair, rebuild or re-carve 1,300 square meters of limestone facade by hand was, by far, the site that required the most time (about 5 summers and good weather days, 2004-5-6-7-8 and spring of 2009), we also kept busy the days the weather wasn’t cooperating:
- To create the cottage in the stable-horseman house which had no running water, no electricity, no sewer system, we started from four walls, a roof and one saveable floor… to transform it into.... a very comfortable holiday rental, (ranked 4 Ears Gîtes de France when it opened):
-- Full electricity, plumbing ~ complete ~ total insulation in the walls and roof, high performance windows and doors, new woodwork, restrooms (toilets) tiling, travertine marble in the kitchen, hardwood floors upstairs, and custom furniture --for example by recycling old furniture with character to make a unique medieval canopy bed... and let’s not forget tons of earth, stones and dust carted away..!

- Engage in a process of modern development for the main house while retaining its historical soul in every detail. Trying to work every part of the job simultaneously with the plans for further instalments to come. We reviewed and corrected almost everything. 70% of the plumbing is new, the electrical system is 100% done at and above all safety codes, heating transformed into high performance at dramatically reduced emissions, condensation, and yields 108%. And we are progressing with the high technology thermo-insulation and doorframes throughout the building to the point of having already divided gas consumption by 2 ... in 10 years. Almost done, reports due out soon!...

Now, in 2015, we are not all done yet but getting there... and to live here year round is very comfortable.... the winter of 2012 at (Celsius) -17 °..!!!...with 30cm of frozen snow in the courtyard and gardens, was not so bad to live through... but rather a bucolic episode (the same winter 10 years ago would have been terrible). Some rooms have now (re)found a complete style and atmosphere reflecting each historical period the House has gone through:
Designed by Philippe R. for La Maison de l'Argentier du Roy | Bed & Breakfast Accommodations - Self Catering " Knight's Cottage " | Loches - Chateaux de la Loire | FRANCE